Library and Information Week: Stories from our Community

The theme for Library and Information Week 2022 is: Rewrite. Renew. Reimagine. It asks us to re-engage with the library, explore the collections and resources, and find new stories or retell old ones.

For us at YPRL, this meant talking to our communities and uncovering what they really think about the spaces, services and programs we provide. It has been a real joy finding out how the library has become a source of connection, inspiration, purpose and of passion during this tumultuous time we are enduring together.

We have been given permission to share the following stories with you. "When I realised we were in a pandemic, I understood that this was a moment in time.

"Being a historian, nothing had been mentioned in my parents’ life about the Spanish Flu even though many lives had been lost. This time I wouldn’t let it happen again.

"I kept writing and writing by hand day by day and every weekend I would put it into a tighter format on the computer.

"It got me through lockdown. I should have called it Keeping well in lockdown, shouldn’t I?

"My idea at the beginning is that you have it on the side of the bed. What day is it today? So, every day has its own page so that it can be easily read.

"Someone said to me 'You know it’s going to take me a year to read!'. And it hadn’t occurred to me! Of course, it is! You can easily read it any way.

"As time went on my friends were appreciating what I was doing and said, 'I am relying on you to do it'.

"I am happy that the book is available for people to access in the library." 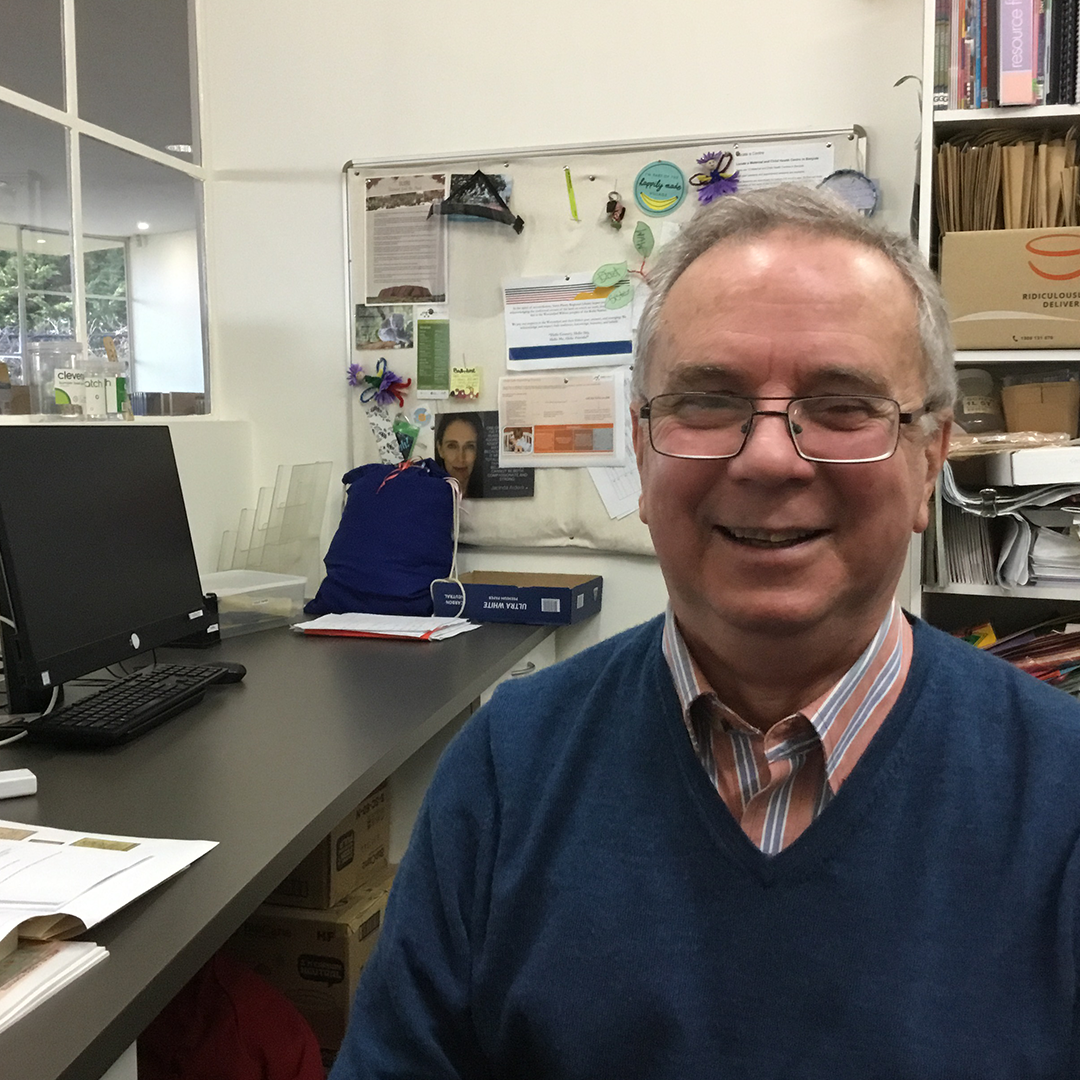 "Before I retired, I didn't have a minute to spare to do anything. I was a typical busy executive. One of the things you realise when you retire is that no one tells you what to do with your spare time. You could end up being a lazy person watching television on the couch. So when I decided to retire, my wife Jennifer said to me, 'Oh wait, you can come over and have a look at the Spanish classes run by Michael at the [Watsonia] library'.

"I introduced myself after the class and Michael said 'You know, you have come at the right time. I need someone to take over the classes because my wife is having a baby'.

"I started working out why people were attending the class — the main reason was that people wanted to learn Spanish because they were travelling throughout Europe, Spain or South America. People were also interested in going to have a cup of coffee, so it became like a social event. I know the history of each country and spend quite a bit of time preparing classes, and I circulate papers for them to read beforehand. A lot of planning goes into it to make the class entertaining.

"I can't believe that some of the people from that first class in 2015 — six or seven of the original people — could hardly even read a word of Spanish and now they are fluent. It's exciting if people get to that stage — [it means] I am doing my job." Bronwyn is one of the regular patrons at Whittlesea Library. She does not have TV reception due to where she lives and therefore gets most of her news from the radio — “but you don’t get to see faces on the radio, it’s nice to see faces”. She therefore uses the library computers to access the internet to follow up on news she has heard on the radio and keep abreast with current affairs. She enjoys movies and documentaries and borrows these titles from the library DVD collection and loves to be surrounded by books.

Bronwyn has always had a connection with books and libraries. Her first job after high school was in an academic library and she also completed the first year of a library technician’s course. She later went on to join the army in a career of military and civilian mapping for over 30 years with a particular interest in official war histories including maps and Australiana. While in the army, books were still of great interest and she spent many happy hours visiting second-hand book shops in the different cities she was stationed in. "Buogiorno, I am Umberto and I am 92 years of age. I was born in Alexandria, Egypt to an Italian mother and Egyptian father. I married in Alexandria and then travelled to Australia on my own in 1956, the year of the Olympics. Six months later my wife Adriana followed me here. Australia was not what I expected — life can be like that, it isn’t what we expect.

"When I first arrived in Australia, I didn’t know the library existed. Well, I noticed the buildings had been built over time but didn’t know what it was like inside. I didn’t think about the library and how it plays a role in the community. For me, life was about working, going home, family, sleeping — the humdrum of life. I didn’t expect a library to be a place where humanity could be found. It was only in my later years when at a very sad moment in my life, that I realised that the library was filled with people, beautiful people, love — I didn’t expect that.

"I first experienced that humanity many years ago when my daughter Anna brought me along to the Seniors group at Lalor Library. At that point in my life I no longer wanted to live without my wife but what I found was a group of people that helped me find happiness again. People who I could have a conversation with or who I could just sit with, who had similar experiences and came from all different parts of the world, just like me. I had found a place where I felt welcomed — I had found a group of people who had a heart. My self-confidence came back and even now in my older years, I still come as often as I can to meet with the group.

"At 92, I live each day one by one, because you never know what to expect, but I am always telling everyone, ‘Go to the library, it is where you learn and it saved my life’." "My mum was a big reader, I'm a reader and [so are] my daughters. I turn off the TV and go to bed and I would never go to bed without reading ever.

"So, I need the library. I needed books and when the lockdown was on, that was really horrific [for me]. Especially the bad one when the library shut completely. That was the first time I had read eBooks.

"That lockdown stage when Sarah was sitting over in the Civic Centre in that little room, was just very grounding, and I don't think people realised how important that was. To have a person sitting there who you could say hello to.

"I created the goldilocks scene for the library, just to say thank you and it was important to acknowledge that importance to me, and it's a bit of fun. We can always do with some fun, can't we?

"I had my granddaughter [with me] the other day and it was so funny when she said 'Nana, I saw your
Goldilocks and three bears up on the shelf. I knew it was yours, I just knew, I saw you make it'.

"I love coming to the library, it's just what I do, and I love to read." "I had attended a genealogy talk at the library and it sparked my interest. Then during our lockdown, I found out Ancestry and Trove were free to use at home — I was so grateful, it made my day. I wanted to write a story about my family because the children don't even know about our history. It was also other things, like what would I write in a eulogy for a family member.

"I thought I'm going to look into this and so I did. I found out where family members lived, what jobs they held and how they were treated. I was able to go back to the early 1900s. Once you find out about one person then that triggers information on the next person they're related to and then the whole history of the family came together. I spent hours that I would not normally have had finding our family trees. I was so amazed at how much libraries can actually supply in history with Ancestry and Trove, and, all for free. Through talking to the family about what I found I heard a lot — even a few secrets. I found out about where my mother had been and done in her younger years of life so that was a bonus too. “I am now the venue and events officer at Ivanhoe Library and Cultural Hub. This is the first permanent job I've had for over 12 years … no one saw this coming.

“Libraries for me were places where you were told to be quiet, places I didn’t want to be [and] where I didn’t feel like I belonged.

“I used to work in the West End of London, the loudest, most outrageous, inappropriate, fabulous environment in the world. I’m loud. I don’t read. I probably can't sit still long enough to sit down and read.

“But during lockdown I got offered a job as a library delivery person, taking books to people in need, and what I discovered was a need for what it is that libraries do.

“I’ve since learned that [libraries] are places of connection where people come together. We help older folks navigate tech. We have storytimes where people come and connect. We have amazing human beings working here who are doing such incredible work. And the fact that it's free, I think it's just astonishing. It's a free thing that people can be so engaged and activated in and enjoy.

“I didn't feel I belonged here and now I feel I should have been here all along."

Catch Up on Crime

These new crime novels are not to be missed. They come in multiple formats and some are part of the Book Express Collection. Don't wait when you don't have to!

Calling all budding scientists! Are you ready to turn your home into a laboratory? Not only can you take part in science activities at our free Science Club sessions in the library, but we can also help you with science at home!

The Secret Life of Withdrawn Books

Have you ever wondered what happens to our books once they are retired from our collection? We offer our members current, topical and engaging materials to borrow, and this means that our physical library book collection constantly changes.