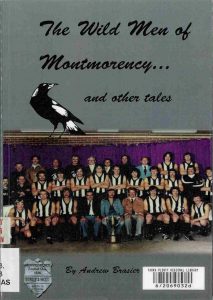 “Diamond Valley footy in the 1970s and 1980s was hard and tough footy at its best and sometimes worst. It was physical, brutal, occasionally spectacular and thrilling, captivating fans and players alike.  In this tribal cauldron where suburb was pitted against suburb there was no room for the feint-hearted”.

The Wild Men of Montmorency recently published by the Montmorency Football Club adds to the community history and more importantly the recreational and sporting history of the local area.

The collection of profiles presented relies heavily on the experience and memories of the author’s own association with the Club but this helps to interweave the voices of his contemporary subjects, mainly players but also administrators throughout the book.  The 1970s through to the 2000’s is the main time frame covered.

Despite the Club’s history going back to 1924, this is not a typical local history with little reference to the early history – and what there is – is presented at the back of the book.  Hall of Famers, including players who rose to the VFL are well represented.  Contemporary and some older photographs help illustrate this easy read.