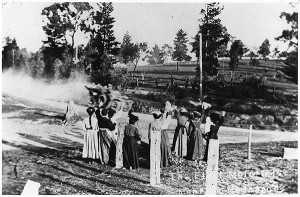 This photo is part of the Shire of Eltham Pioneers Photograph Collection.  American President Theodore Roosevelt's Great White Fleet, 16 battleships and four destroyers of the United States Navy, all painted white, visited Melbourne (then the federal capital) from Saturday 29 August 1908 until the following Saturday. The Automobile Club of Victoria took 100 officers to Black Spur via Eltham, Kangaroo Ground and Yarra Glen. This photo was taken near Research and illustrates a group of women waving to the cars as they drive by in a cloud of dust.

This photo appears in "Pioneers & Painters" by Alan Marshall. page 86-87, with the caption: Feminine reception near Research for the US Fleet, on their visit to Melbourne in 1908.

The Evelyn Observer reported on September 4, 1908

"In connection with the visit of the American Fleet, the Automobile Club of Victoria will take 100 officers to the Blacks' Spur to-day (Friday). It was originally intended to make the up. trip via Lilydale, returning via Kangroo Ground, but owing to a portion of the road between Lilydale and Yarra Glen being under water, the route may be changed. An Inspector was sent up yesterday morning, and upon his report the committee will decide the route. Should any deviation be made it will be after passing through Surrey Hills, when, upon gaining the White Horse road, a turn to the left will be made until Burke road is reached, then along Burke road, across Bulleen or Doncaster road to Heidelberg, thence via Eltham, Kangaroo Ground, to Yarra Glen, It is intended to start the trip from Melbourne at 8.30 am, and if the deviation is decided upon the cars should pass through Kangaroo Ground about to 10 a.m. but if the original route is stuck to it will be evening before they pass through."