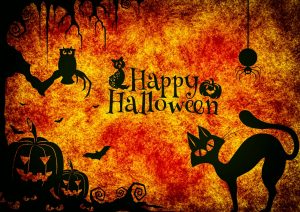 A Bit of Backstory...

Halloween – that spooky time of year when it's said that the veil between the living and dead is thinnest, and supernatural creatures come out to play!

Do you go out trick-or-treating, or wear a costume to a party?

These traditions have ancient roots. It is widely believed that Halloween or All Hallows’ Eve is an ancient Celtic festival called Samhain (pronounced ‘sah-win’ or ‘sow-in’). The Celts lived about 2,000 years ago in the region that is now Ireland, the United Kingdom, and northern France, and Samhain is a Gaelic word that roughly translates to ‘summer’s end’.

During Samhain people wore masks to trick the ghosts into believing they were fellow spirits. Offerings of food were left on porches to keep the ghosts contented and outside the house.

And Jack-o-lanterns - pumpkins carved into scary faces - were once made from turnips and beetroot. According to legend, ‘Stingy Jack’ the no-good trickster is forever trapped inside, with only a burning coal for light. People make their own lanterns to scare Stingy Jack away.

While Europe had a long history of celebrating the dead, Early Halloween celebrations in America included public events around the harvest, where neighbours would share stories of the dead, try and read fortunes, dance and sing. Ghost stories and various forms of mischief-making, or tricks, became more common. A bonfire would be lit, sweets would be prepared, and costumes would be worn to ward off evil spirits as the ancient Celts believed that, at this time of year, the veil separating the worlds of the living and the dead was at its thinnest.

Today, Halloween has become a holiday celebrated by many people across the globe. Many of the traditions and customs associated with our current Halloween celebrations have their roots in ancient European holidays and festivals.

The wind is howling, the bonfires are burning.  Get ready to be scared out of your wits during our Halloween celebrations at YPRL. Let’s celebrate Halloween at Yarra Plenty Regional Libraries by visiting your local branch and enjoying a FREE event.

We have some spooky, weird and magical fun lined up... 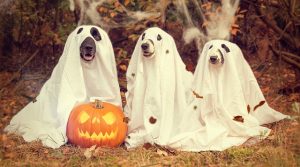 Will you be trick-or-treating on Halloween this year? Before you do, why not try some free Halloween colouring in?

By Coralie and Amy! (Reading Coordinators at Whittlesea and Ivanhoe Libraries)

Looking for some Spooky Reading?

In the dank dark house at the end of your street, on the top of the hill, next to the cemetery... cobwebs festoon, crawlies creep and screams are carried on the wind. There is no resting in peace for the ghosts, witches, skeletons, undead and black cats that haunt from the shadows. (Did I miss any stereotypes?) On the lone bookshelf, covered in dust and decay the following books may be found.