Working in a library with many digital resources drove Jack Chan to look at how his library could help users digitise their own history. 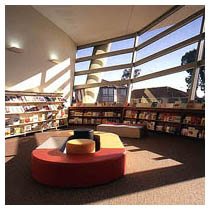 Mill Park Library, part of the Yarra Plenty Regional Library service, opened in 2002 at a cost of $8 million and was the first library in Victoria to be designed around the concept of being a hybrid digital and print library. In 2015, Mill Park Library began exploring how to assist the community in preserving family memories and stories by enabling them to digitise their own physical collections.

The library staff came together to investigate what mediums users wanted digitised; what equipment was available to use; and what was the best way to teach the users how to digitise their collections. Pondering these questions resulted in the decision that we would offer demonstrations on converting VHS tapes, cassette audio tapes, photo slides and vinyl records through a variety of workshops while providing information and advice about the technology required.

We sought recommendations of a VHS video converter to use. We had tested some of the cheaper converters but found that the quality of the video was worse than the quality we had hoped to achieve. So, we borrowed one and purchased a photo slide converter and connected a tape player to a computer. With these, we ran a series of demonstration workshops where we also showed attendees the technology available for them to purchase to convert their media. The attendances at these workshops were quite high. However, the demonstrations did not provide the opportunity for our users to digitise their personal collections. Unfortunately, we were only in a position to teach skills and provide information about where they could purchase the equipment if they wanted to digitise items at home. 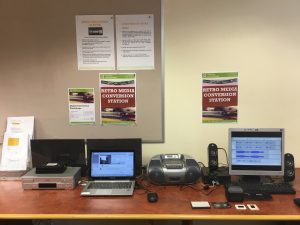 In response to this feedback, we set about developing an onsite media conversion station in 2016. The idea of the station is to allow the community to book in, bring their old media into the library, and convert them onsite. By offering such a service, there would be no need to hire out equipment. The station was designed around providing free access to digitisation equipment although users are required to attend a mini-workshop to learn how to use the equipment before they are allowed to use it. They can then book to use the station in their own time.

After testing the equipment and developing user guides, the Retro Media Conversion Station was opened for public use by the start of 2017. We received community feedback and decided that VHS tapes, cassette tapes and photo slides were the three conversion services to offer. The conversion station is now part of Mill Park Library’s Maker Space program and is currently situated in the library’s Local History Room. Users are able to book access to the digitisation equipment via email or phone. 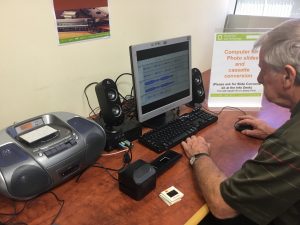 The next step in developing the station will be the introduction of a high-resolution photo scanner. This will allow the community to digitally scan and even edit their photos or historic documents. There will also be photo-editing workshops developed to complement this new equipment.

This article was published in Incite - Issue March/April 2019

If you are interested in digital conversion. See here for upcoming demonstrations and opportunities.