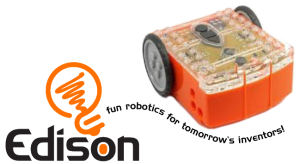 Edison is a small, car-shaped robot aimed at teaching coding and robotics to students from age 4 to 16.  It is designed to be LEGO-compatible, affordable, and can be programmed in a range of computer languages including Scratch and Python. Edisons are equipped with sensors for light, sound and infra-red, allowing it to react to light, follow a line, and avoid obstacles.

Besides controlling it using computer code, students can play with Edisons on several different levels, using pre-programmed functions such as Line Following, Clap-Control or Robot Sumo. Standard remote controls (eg for TV or media players) can also be programmed to work as remote controls for Edisons.

When paired with LEGO components, Edisons can be built into complex machines such as a crane or a printer, thus teaching students about machines, design and engineering.