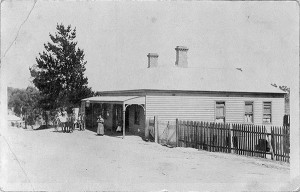 This photo is part of the Shire of Eltham Pioneers Photograph Collection. Other than a title and information that it was taken before 1920, we knew little of this building. A discussion at a recent meeting of the Eltham District Historical Society suggested it was located on the current site of the Research Pre-School located at 1555 Main Road, Research on the north side of Ingrams Road and that it was burned down in the 1930s. A search on the digitised newspapers in Trove subsequently revealed the following:
FIRE AT RESEARCH, RESEARCH HOTEL DESTROYED Another old hotel in the Eltham district has been destroyed by fire -the hotel at Research. The outbreak occurred on Sunday afternoon last at 3 o'clock, the fire originating in the kitchen through a piece of wood falling from the stove. The Eltham fire brigade was soon on the scene, but as there was no water they could not save the building , which soon disappeared. Miss Jane Seaton was licensee and the property was owned by Mrs. Pretty, of the Recreation Hotel, Clifton Hill. It was insurured for £200 in the Commercial Insurance Company, and the stock and furniture were insured for £3.00 in the Guardian Company. The hotel was built by Mr. W. West (who now resides in Eltham) between 40 and 50 years ago, and he occupied it until a few years back.