Pandemia is our community story and we would love you to join in and contribute to it as many times as you like. It can go in any direction you want – just use your imagination! It's Pandemia! 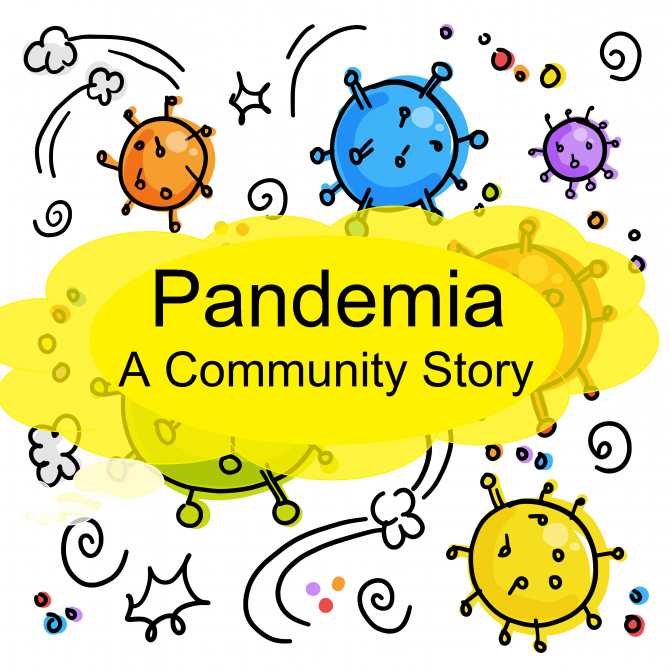 To take part register online, then we will:

1. Send you the latest paragraph of the developing story.

2. Email it back to the Coordinator.

Then we add your contribution to the story below!

“Bloody ignorant bastard! – ever heard of social distancing?” Ahead of her on the escalator Martha recognised her neighbour David, yelling at the broad back of a man bounding up the Greensborough Plaza escalator. When David alighted he saw Martha a few steps below and waited.

“Did you see that?” he began, dispensing with ‘hello’. “I’ve just had surgery on my hand and still dealing with my lung operation – risking my life just coming to buy food and that bastard touches my arm to move me so he can get past.”

Martha shook her head in sympathy.

“Apparently social distancing doesn’t matter as long as you say ‘Excuse me’. I shoulda tripped him. Serve the bastard right.”

Glancing at her 73 year old neighbour Martha wondered if he’d looked in the mirror lately and considered his odds in a fist fight with a young man. But instead she said, “Perhaps you could get home delivery or some Council help? Then you could stay home until you’re well."

“I’m not having strangers in my house... and besides a man’d go crazy locked in his house. I’ll just carry a walking stick in future. That’ll fix any morons.” David picked up his bag to end the conversation. “Anyway, see ya later,” he shuffled off in search of groceries, or more people to abuse, Martha wasn’t sure which.

That morning she visited three stores and was squirted with more alcohol than she usually consumes. Hand sanitiser, languishing in chemist shops for years was now essential and therefore costly. Her friend Alice was making her own using aloe vera plants, and although no chemist, Martha doubted its effectiveness.

The floor of the food court was chequer-boarded with sticky-taped crosses and signs telling customers to wait on these until called to be served. The mass of crosses radiated in all directions causing the passing crowd to walk between the waiting customers, an outcome Centre management apparently hadn’t anticipated.

Leaving the Plaza Martha drove to Partington’s Flats where she walked one lap of the very steep incline behind the sports fields at least twice a week. When her sons played footy for Greensborough the coach had sometimes made the team jog the same route. Her family christened it ‘Footballer’s Hill.’

It was one of the few remaining local tracks not overrun by walkers, joggers and cyclists. Martha used to cycle or walk Diamond Creek Bike Path or sections of the Heidelberg Trail. But since the virus, those flatter paths had become dangerously overcrowded, and not just from the point of social distancing.

Temporarily escaping their homes, people had flocked to them in droves. Lycra-clad racing cyclists without bells or warnings tore past novice riders wobbling along on new bicycles, overtaking an army of gasping, overweight people pedalling so slowly they seemed to defy gravity by not toppling. Young children, hundreds of metres ahead of exhausted parents ignored high pitched screams of ‘Come back here at once’.

One morning two women stood on the footpath ahead of Martha talking. As she approached they stepped onto the nature strip, one continuing to speak the whole time.

“I’m telling you, Mrs Latiff, I can’t get him to do anything! He won’t listen to me. I log him on and when I come back ten minutes later he’s playing Minecraft. It’s terrible! I’m shouting at him all day. He hasn’t done any schoolwork for ages. What’ll I do?”

It was obviously an unscheduled ‘parent-teacher interview’. Being a retired teacher herself, Martha nodded at the silent Mrs Latiff in her baggy tracksuit and thought how difficult it was teaching close to home. No doubt hoping for a private jog before creating and delivering on-line lessons, Mrs Latiff had unwittingly jogged into the path of a parent.

Returning home, Martha heard the lady two houses down ringing the 9 am bell that told the street to start home-schooling. She’d volunteered to ring the bell when the schools closed. Two hours later the bell summoned the children out to play. Martha’s neighbours were friendlier since the lockdown. Some now swapped excess fruit and vegetables and others left unwanted plants on their nature-strips beneath cardboard signs declaring ‘Free Plants.’

When the young couple next door started mowing Martha’s nature-strip and bringing her bins in, she wondered if they thought her ‘Use by Date’ was up. Staring at her 67 year old reflection in the mirror, Martha decided for a few days at least she’d eat her desert before dinner, just in case.        (Written by Sue)