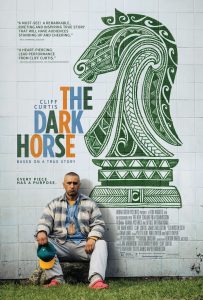 With the punch of Once Were Warriors, NZ drama The Dark Horse depicts the disillusionment, hopelessness and violence of contemporary Maori life, as well as providing a sense of possibility, hope, and joy.

The main character of The Dark Horse is inspired by real life speed chess champion and coach, Genesis Potini (1963-2011). Potini struggled with bipolar disorder throughout his life. He struggled to manage himself and was released from hospital into the care of his brother, a patched, violent gang member. While Potini tries to maintain stability in his life it becomes increasingly difficult within the chaos and violence that surrounds him.

As a means of coping Potini reaches out to an old mate and begs to be involved in the chess club that meets in his mate’s back shed. Potini passionately takes up the task of teaching local disadvantaged Maori children the game of chess. He ran the Eastern Knight Chess Club for ten years and had a life changing impact on the children he taught, leading them to championships and enabling them to see the potential in themselves.

Here are some chess books from our shelves:

How to Play Chess

How to Beat Anyone at Chess

What It Takes to Become A Grandmaster

Before She Knew Him