Our login server is currently down, so you will be unable to login to place a hold or check on your items. We are currently working on a fix. Please contact us at ypmail@yprl.vic.gov.au if you need any assistance. 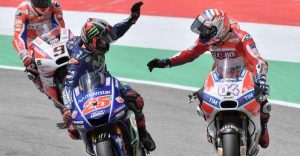 The next race at Brno in the Czech Republic marks the halfway point of the 2019 Moto GP season. A lot has happened in the first half of the season which has again been punctuated by other worldly performances by Marc Márquez mixed with dismal failures by other riders.

Let’s take a look at how this year is panning out for the top riders.

Marc Marquez – He’s already more than two races clear at the top of the points table and you would think barring a terrible accident or global nuclear war that he will again be world champion by the end of the year….or even sooner… His ability to ride the Honda at what seems to be about 187% has propelled him to this point mostly on his own abilities. I say mostly because input by others has affected this.

Jorge Lorenzo – Marc’s team mate and the ‘input by others’ referred to above. This input came in the form of a kamikaze performance at the Catalunyan GP where he not only took himself out of the race but also took the three other main contenders for the title out, this being Vinales, Dovizioso & the The Doctor (Valentino Rossi). Jorge is nursing cracked vertebrae in his back at present and will want to make sure they are healed properly before getting back on board the Honda bucking bronco.

Fabio Quartarororararaoro – The most beautiful man in the world is both impressing and disappointing in every race so far. Impressing with speed and youthful exuberance and disappointing with a number of accidents, some of them amateur and foolish and yet he could possibly still win a race this year.

Maverick Vinales – He recently won a race proving that the factory Yamaha is actually a fast bike. I’ve not seen him grin so widely since Paris Hilton hugged him on the podium a couple of years ago which might be a fun memory or an embarrassing one. More success to come later in the year.

Alex Rins – He’s been racing at the pointy end all year and if he could stop having the odd prang would be probably in second place by now. His team mate, Joan Crawford is doing ok for an actress who fell off the planet in 1977.

Andrea Dovizioso – The great Italian hope. Fast becoming a perennial bridesmaid Andrea just needs to keep doing what he’s doing and stay on board (that means keep away from Jorge) and with luck he could be a contender later in the year.

Danilo Petrucci – Won his home grand prix and is still celebrating which has affected all races since in which he has been shite. He’s still third in the title race so let’s wait and see.

Valentino ‘The Doctor’ Rossi – The crowd favourite. The most famous guy out there. The richest man in the field. It’s widely considered that if he retires that up to 30% of the viewing audience will tune out and watch something else (and it won’t be F1…) Il Dottore is in a form slump at present as he chases an elusive tenth world title. As each year goes by this seems almost beyond him but still every race he fronts up and qualifies. Every race the tracks around the world are bathed in yellow smoke from the Doctor’s legion of fans.

Jack Miller – The great Aussie hope. Jack likes a drink and a bit of a laugh. He’s not laughing much at present as he keeps on going fast and then chucks the bike into the fence. He has to stop doing that and probably doesn’t need to be told that by a team chief or anyone else in any position of authority.

All the others are really just making up the numbers at present and falling off to amuse the crowds. We can always count on one of the Asparagus brothers to bin it, Carol is good at winding up in the weeds and Halfizluck was born with kitty litter in his helmet.

Also I’m pretty sure that Tito Rabat is the albino monk from The Da Vinci Code.

Lastly let’s all wonder about Zarco. All I can say is that his performances this year reflect what happens when you trade your very fast bike for a very large bag of money.

Here are a few Formula One titles from the collection to check out:

Formula One Circuits From Above