Fifty years since ‘one small step for man’ and a grainy black and white television streaming of those first steps. To honour of this momentous anniversary, Readings rounded up their favourite books on space exploration and you can get these ones from your library. 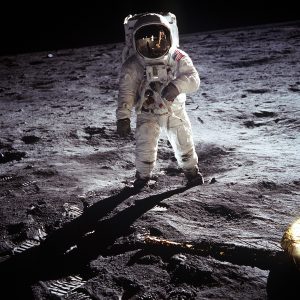 Reach for the stars!

This is the inside story of the astronauts, NASA engineers and political rivals that brought an end to the Space Race. Neil Armstrong, alongside Buzz Aldrin and Michael Collins. Astronauts, engineers, politicians, NASA officials, Soviet rivals – all tell their own story of a great moment of human achievement. Definitely one to read to celebrate the 50 year anniversary.

This is the companion book to the BBC series of the same name and is another book to use eyewitness accounts and newly discovered archival materials to chart the unknown stories of the individuals who made the Moon landing possible, at a time of great scientific innovation, political calculation and media spectacle. If you want a lot of the back story then this is definitely the one for you.

Want to know more about the man behind those memorable words ‘one small step for man’  then this is an astoundingly personal biography of Neil Armstrong. Granted over 50 hours of personal interviews and access to all his archives, Hansen is  his is able to show us the man behind the myth, and a compelling take on Armstrong’s legacy as the first man on the Moon. This has now been made into a major motion picture starring Ryan Gosling and Claire Foy, and yes you can borrow this from the library too.

If you are fascinated by space missions and the moon landing, but find the science of it all a huge hurdle to your understanding then this is the book for you. Neil deGrasse Tyson brings the universe down to Earth succinctly and clearly, with sparkling wit, in digestible chapters consumable anytime and anywhere in the busy day.

We all love anything by Brian Cox but this is an absolutely beautiful book for those who really want to get to know the other planets in our Solar System. This is a groundbreaking exploration of those familiar planets such as you’ve never seen before with fascinating facts and stunning space photography.

This book is a celebration of ingenuity, imagination and exploration that charts and salutes mankind’s experiences and adventures in space, from Sputnik’s launch in 1957 through the Apollo Moon landings and the International Space Station to future missions to Mars and beyond. This is a fascinating book for anyone who never considered how our explorations in space truly changed the way the world functions; for example, by opening Earth’s orbit, we were able to revolutionise communications – satellites, anyone?

And let’s not forget Australia’s contribution to the moon landing.  Honeysuckle Creek reveals the pivotal role that the tracking station at Honeysuckle Creek, near Canberra, played in the first moon landing. Andrew Tink gives a gripping account of the role of its director Tom Reid and his colleagues in transmitting some of the most-watched images in human history as Neil Armstrong took his first step.

If you were given the golden moon journey ticket would you take it? Rocket Men tells us of the story of the men who did take the ticket to ride.  It is the definitive account of one of America's finest hours that reads like a real-life thriller. In these pages, Kurson reveals the epic dangers involved, and the singular bravery it took, for mankind to leave Earth for the first time-and arrive at a new world.

Or if you want to know what has been achieved since the moon landing then veteran space journalist Nancy Atkinson’s Incredible Stories from Space, is what you would like.  In it she shares compelling insights from over 35 NASA scientists and engineers, taking readers behind the scenes of the unmanned missions that are transforming our understanding of the solar system and beyond.