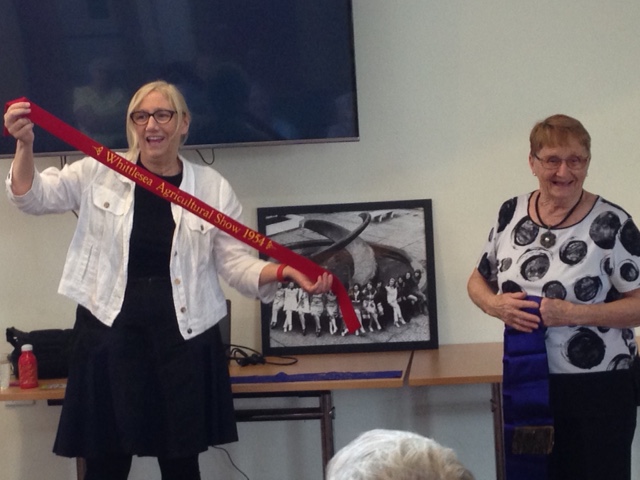 Curator, Dr Annette Shiel from the Royal Agricultural Society of Victoria was a special guest at Whittlesea Library this month as part of Yarra Plenty Regional Library’s Local History Month Program (in partnership with the City of Whittlesea Cultural Heritage Program).

Dr. Sheil shared her project to re-unite former Miss Show Girls from 1957 to 1996 and to gather and preserve their stories. The program evolved over the years. Winners from country Agricultural Shows would move on to the Miss Melbourne Show Girl. There were no set criteria for “winning”; each Agricultural Society would decide their own. One common factor, though, was appearance and entrants usually had to present themselves in “afternoon wear”. For many, this may have been a borrowed dress or hand-made for the occasion. One lady was cautioned for her glittery beads when she was advised that they were for night wear only. The event may also have included a short interview, including goals in life.

For many country winners, this was a first visit to Melbourne. Many girls often had the one outfit and would have to scramble for an array of good clothes to take with them to the City for the week of festivities which included being pampered with hair and makeup treatments and staying in Melbourne’s Premier Hotel at the time; The Southern Cross Hotel. They were expected to participate in the Show’s daily parade and present prizes to the various successful exhibitors including animals, crafts, preserves and more. For many, they were country girls who helped their families on the farm and were not used to stockings and heals during the day.

Within our audience on the day, four local women had entered the Whittlesea Miss Show Girl (two had won) and one lady entered and won Miss Eltham Show Girl. A number of photographs and original sashes were brought along. Recipients were encouraged to wear their sash and tell their story. Three friends attended together and had all entered in the late 1950s. We also heard from Miss Whittlesea Show Girl 1987 who unfortunately did not achieve her dream at the time to enter the army.

This was a wonderful afternoon, connecting our community with the lesser known stories in our local history and was a wonderful connection also of personal histories and reminiscences of times gone by.  Learn more at Royal Agricultural Association of Victoria website