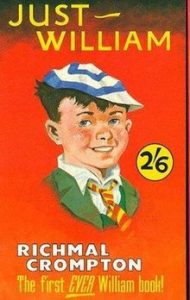 Who is William and why are we talking about him?  William is a character created by Richmal Crompton Lamburn, a popular English writer.  She released William to the world back in 1919 and he and his friends quickly became favourites with all readers, children and adults.

William, an 11-year-old schoolboy, is variously described as "mischievous" and "unruly".

Crompton wrote 39 William books during her life. William the Lawless, the last one, was published after her death in 1970. The book series has been adapted for television, film, theatre and radio. There is even a Just William Society.

This year, marks the 100th anniversary for Just William. We have a number of the books in our collection. See below. We hope you enjoy William's stories if you're returning to him or meeting him for the first time!

This is a list of the "William" books written by Richmal Crompton.