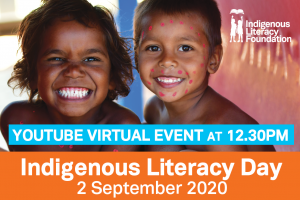 Indigenous Literacy Day celebrates language and literacy. Celebrated annually on 2 September, this Wednesday a YouTube Live Launch at 12.30 pm will feature a fast-paced, highly visual celebration designed to engage Australians in the value of Aboriginal and Torres Strait Islander peoples’ first languages. If you miss it, you will still be able to access at a later time.

The Indigenous Literacy Foundation help close the literacy gap in remote indigenous communities by providing culturally appropriate books – with a focus on early literacy and first language, and by running programs to inspire communities to tell and publish their own stories.

The Foundation’s Indigenous Literacy Day for primary and early learners is an opportunity to share and enlighten children about Indigenous song, languages, and stories.

Respect is the first title in the ‘Our Place’ series of four children’s picture books which welcome and introduce children to important elements of Aboriginal and Torres Strait Islander culture.

'Tales from the Bush Mob' is a series of books about the Bush Mob, a group of animals that works together to solve problems. A rich landscape of characters and places populate this series and include Platypus, Koala, Emu, Wombat, Kookaburra, Echidna, Kangaroo and Gusto, the wind.

Maureen Jipiyiliya Nampijinpa O’Keefe grew up in the remote community of Ali Curung in the NT. Her family lived a bush life. They didn’t own much but her mother had a very special ‘elephant’. It was her mother’s most prized possession and she gave it tender loving care. When her mother’s friends were around, they had tea-parties with the elephant. Often her mother would sleep with it beside her bed.

Using the accounts of early European explorers, colonists and farmers, Bruce Pascoe compellingly argues for a reconsideration of the hunter-gatherer label for pre-colonial Aboriginal Australians. He allows the reader to see Australia as it was before Europeans arrived – a land of cultivated farming areas, productive fisheries, permanent homes, and an understanding of the environment and its natural resources that supported thriving villages across the continent.