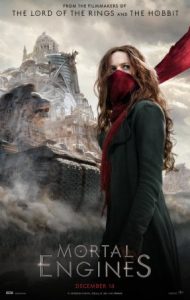 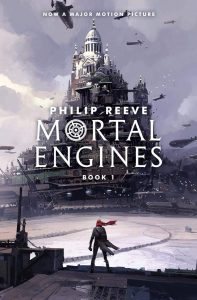 Did you know that Philip Reeves’ dystopian novel, Mortal Engines falls into the sub-genre of 'Steampunk'?

Like me you are probably thinking... what in the world is that?

Steampunk is in the science fiction/science fantasy family. It often has both a futuristic and historical feel to it and incorporates technology or designs based on steam power. It is also usually set in the 19th century. It can include alternate history, time travel, magic, vampires, gargoyles, zombies....basically anything goes as long has your tech has a connection to steam power.

Steampunk also has a distinctive fashion with old-style suits or corsets but embellished with brass and machinery cogs or electrical devices.

If you stumbled upon Mortal Engines, (which is available as a book, ebook and downloadable audiobook - easily found on the app: Libby) or the 2018 film adaptation, and are wanting to dive a little more into this genre, why not try one of our Steampunk suggestions below?

'An interesting and enjoyable story set in an alternate Victorian England about the exploits of Wellington Books (an Archivist who would like to be left alone) and Eliza D. Braun (a reckless field agent with an unhealthy enjoyment of high explosives), who are forced to work together to protect the Empire from their individual pasts, a secret society and an Italian assassin.

I suggested this to my 70 year old mother and she enjoyed it so much she read the entire series and has started on other Steampunk novels (including The Bullet Catcher’s Daughter).'

Are all Steampunk novels series? No. But many of the good ones are. So, the following book recommendations are all Book 1 in the series. These are mostly series of 3, 4 or 5 books.

The Casebook of Newbury & Hobbes