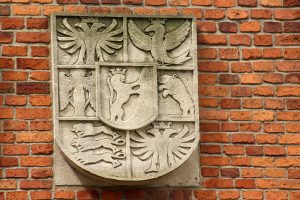 The following is a guest blog post from Tammy Eledge

Heraldry is the science, art and system by which coats of arms and other armorial bearings and symbols are employed to distinguish individuals, armies, institutions and corporations. Coats of Arms and Armorial bearings carry symbols which originated as identification devices on flags and shields.

Forms of heraldic display appeared in England during the reign of Henry I (1068-1135) which was right after the Norman Conquest of 1066. During this time there were many feuds and wars that made it necessary to be able to identify a person or group on the battlefields. Illustrations of early heraldry started to appear to represent these new powers. A manuscript from this period shows a shield with upraised swords with a bear surrounded by geometric and angular patterns demonstrating a powerful stand against authority.

Shortly after this time male members of nobility of European countries started putting symbols on their shields that were known as “charges" which identified their families. They also put these symbols on their amour, seals and banners. Images and paintings began to show Knights with their symbols and so these became a familiar sight. This was now the beginning of a new language and becoming a way to identify families and individuals. These beginnings shaped the way we now know as the art and form of heraldry.

Heralds were a loud and boisterous bunch. They came from the same group of people that were minstrels who specialized in telling epic narrative poems about deeds and actions that were accomplished. These men were hired to go along on the military campaigns to keep the troops spirits up.

By the 13th century heralds were beginning to make their move away from minstrels and into a rank of their own. The heralds were not only announcers for the tournaments, keepers of the coat of arms, messengers and ambassadors, they had a kind of diplomatic immunity since the herald served the general cause of chivalry, as to a specific person. They were were making a name for themselves in developing the rolls that held the coat of arms, blazons, and the jargon that was associated with them. There were basically two types of rolls, the first being the occasional roll that record the knights presence at a battle or tournament and the second the recording of knights ordinaries and armorials. They were blazoned in a way that we would recognize today.

By the 14th century the heralds were now members of the chivalrous society and were highly respected. Kings and families of nobility were hiring heralds on a permanent basis. This century was where the heralds official titles were being formed. If they worked for the King the were referred to as a kings of arms. If they were kings of arms they were considered experts on the coats of arms in use within that specific region that was called a march (which later became a Lyon in Scotland and an Ulster in Ireland). The custom of hiring a herald spanned all the way from Kings to common mercenary captains because of their usefulness. He was given diplomatic immunity and he learned martial law and could identify troops by number and nature. The herald had made themselves indispensable to all ranks of society.

The royal heralds duties had expanded into assigning coats of arms to persons that were new to nobility. They tracked the nobles ancestries and descendants of the old families. They sometimes acted as witnesses in courts handling heraldic or probate cases. The Tudors and Stuarts of the British Isles established a system called heraldic visitation. It restricted the population of armigers by sending the king of arms or someone from their group to each shire to record the name of the person that held the coat of arms and their right to hold that coat of arms.

The current repositories that manage the designs and recordings of coat of arms today are the College of Arms in England, the Court of the Lord Lyon King of Arms, in Scotland and The General Armory of England, Scotland Ireland and Wales. Heraldry today can be seen in the formal dress of nobles and clans and in decor around the world.

More information on your surname and their coat of arms can be found at Coadb.com where they take the extra time and care to find and display each coat of arms that can be identified for a surname. Other resources that they use to help identify coats of arms for surnames and you can use too are the heraldry books: Burkes General Armory, “Rietstap’s Armorial General” and Burkes Peerage and Knights.