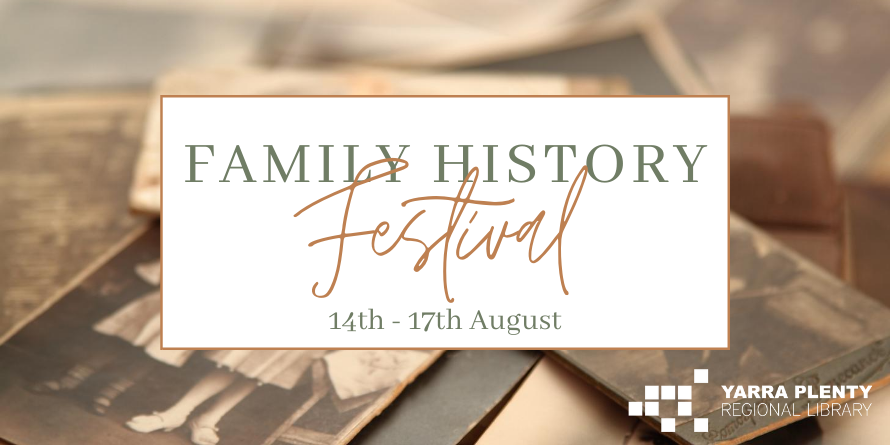 This weekend we celebrate our Family History Festival through a series of blog posts including information and activities.

On Saturday 15 August we acknowledge the 75th anniversary of the end of World War 2. Japan accepted the Allied demand for unconditional surrender on 14 August 1945. For Australians, it meant that the Second World War was finally over. The following day, 15 August, is usually referred to as Victory in the Pacific (VP) Day.  Almost one million Australians served during the Second world war. It is a time to pause, reflect and acknowledge the service and sacrifice of more than 39,000 who lost their lives and to remember those who made their contribution in service on the home front.

Did you know that the Diamond Valley Learning Centre, Greensborough, formerly tea rooms was a training station for Air Raid Precaution (ARP) wardens volunteers during WW2?

The Eltham War Memorial Complex at 903-907 Main Road, Eltham was built as a result of the community seeking an appropriate form of memorial ‘which will be a constant reminder to us of those who fought for us and the little ones for whom they fought and died.’  Learn more via the Eltham District Historical Society

Among those commemorated at Eltham is the Rutter Family

Street names in the Olympic Village, West Heidelberg were named for WW2 battles including Alamein and Midway.

Eltham Cemetey has recently installed a plaque to recognise the anniversary.

A commemorative service will be televised from the Australian War Memorial on Saturday 15 August commencing at 10.00am. Listen to this special podcast about VP Day and explore more via their website

The Shrine of Remembrance is inviting people to their service which will be live streamed via their Facebook page. Sunday 15 August, 11.20am.

The Shrine also have videos, podcasts, stories and publications to browse

Enjoy films and documentaries from our streaming platforms.

The Department of Veterans’ Affairs have been publishing their 75 days, 75 stories featuring veterans in their own words sharing their experiences

The Anzac Portal  tells the history of Australians serving in the defence forces though veterans’ experiences. A number of history publications, war history websites, a digital exhibition and veteran interviews provide a greater understanding of Australia’s wartime experiences, both on the frontline and on the home front.  Includes resources for students.

Browse issues of Mufti digitised by State Library Victoria.  Mufti (1934-2000) was issued by various Returned Services Leagues organisations. Monthly issues include accounts of battles, feature articles and honour rolls for Anzac Day and Remembrance Day each year, commentary on political news of importance to members of the day, plus news from Victorian sub-branches, biographies and obituaries of members.

WW2 has been a long time setting for writers within which to set their stories. Enjoy this selection of downloadable audiobook or ebooks. 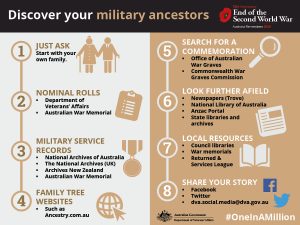 To find out more about your own WW2 ancestor or relative, ask family members what they know and look for records in the family, including photographs that may provide clues.  If you cannot find a death registration that would fit the time period, this could indicate that your relative died in the war.

The National Archives of Australia  hold service records.  These include personal details, enlistment details, postings, leave taken, injuries and illnesses. Many files have now been digitised and are available on line via the RecordSearch function, if not a request can be made to order a copy.

The Australian War Memorial website is well worth a visit.  They have a unique collection of art, photographs, film, sound recording and private records.  Search by name or unit. Browse their blog and encyclopedia. Enjoy their new #MuseumAtHome feature curated as restrictions came into place this year.

Search the World War Two Nominal Roll with as little as a surname.

Australia at War incudes ‘everything’ you wanted to know about the Home Front in Australia during WWII.

In the lead up to the anniversary Australians are encouraged to capture and share the stories of our Second World War veterans by holding an image of a relative, taking a picture and sharing it to social media using the hashtag #OneInAMillion