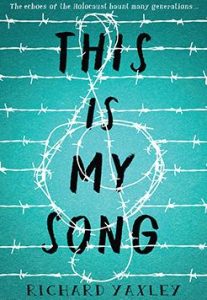 This Is My Song

This is an intensely moving novel but I think it can get lost to adult audiences by being allocated as 'Young Adult'.

It is a story told in three parts from three generations, crossing three continents and from three different points of view. It beautifully, sparingly and poignantly drives home the impact of trauma and how this is passed down the generations. It is compelling and unforgettable as the blurb on the back of the book promises and deserves much greater appreciation and readership than The Tattooist at Auschwitz by Heather Morris as it is a far better book.

To begin we meet Rafael Ullmann on the point of death who is going to break a lifetime of silence to tell his story to his daughter who has no knowledge of his background or family. And the story starts with his poor deluded father, Rafael’s place in Prague, as part of a family in the Czech Republic, his discovery of music and finishes in Auschwitz with the loss of family and with the death of music in his heart. We then meet Rafael again in the 1970s through the eyes of his daughter Annie, and through the lonely, beautiful rugged Canadian wilderness until her escape, running to more life and away from the silences of her home, with music still forbidden. And finally we meet Joe, his grandson, a Brisbane teenager locked in the mundane, a beautiful singer, the music finally bringing life.

The characters we meet along the way are all brilliantly drawn, with short sharp decisive scenes and Yaxley brilliantly uses the silences in families to demonstrate the rifts and also the unspoken love. Each of the main characters have an authentic voice that tugs at the readers emotions. In the judges words ‘It is poignant, memorable and intensely moving’.

Definitely a recommended read and would make a great Book Club novel as there is so much to discuss.

This Is My Song (eBook)