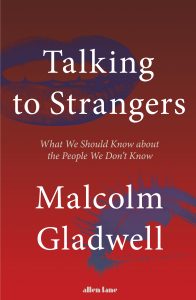 Malcom Gladwell is a journalist for The New Yorker and writes about social sciences that interest him. There are a lot of YouTube interviews of Malcolm Gladwell discussing this particular book and one of the things he maintains is that he is not looking to persuade his readers. He is more interested in capturing their interest and curiosity. Here is a keynote he did for How To Academy that was very interesting about the paradox of human communication that he illustrates in this book. Well, he definitely captured my interest and curiosity in this book and also about him. It was fascinating. He brings together totally disparate case studies of where credible people have been duped for years and where tragedy and misjustice have been done because their own actions are completely misinterpreted by police, despite all evidence to the contrary. The case studies he brings together include prewar appeasement between Chamberlain and Hitler, paedophilia, the TV show Friends, Amanda Knox and Bernie Madoff cases, suicide, torture, spies, and date rape. I know, random right?

The link he shows firstly is we have a compelling need to believe the confident con who presents the ‘normal’ cultural face and ignore any evidence that may alert us to the contrary. We have a predisposition to doubt seeing what we did not expect to see. Society, which sees us cooperate at a vast and complex scale, needs us to trust more than we suspect so this is a good thing overall.  Being incredibly suspicious of ‘difference’, reading threat, menace and deception into any interaction with someone who is displaying difference leads to tragedy. And this is the case he opens with. Sandra Bland was an African American woman who seeing a police car speeding up behind her on a Texan road moves over to let him pass without indicating. And this is the excuse the police officer used to pull her over. The whole situation escalates with Bland ending up in jail, and three days later she is dead by suicide. Gladwell then takes us on a journey of why we are so bad at understanding strangers when we are so certain we are good at it.

‘We think we can easily see into the hearts of others based on the flimsiest of clues. We jump at the chance to judge strangers. We would never do that to ourselves, of course.  We are nuanced and complex and enigmatic. But the stranger is easy. If I can convince you of one thing in this book, let it be this: Strangers are not easy.’

All the case studies were fascinating, most of which I had only limited knowledge of, and had me reading many other articles to give me more information than imparted in the chapter. I also watched numerous interviews of Gladwell discussing the book which were also fascinating. I am sure that we should question our responses to people and be slow to judge others as we should always seek to understand more fully. However, I do not believe the Sandra Bland case was so simple. Or even every one of the cases he presents to us. Context, culture, racism, history and policy are all discussed in the book and all play a part in how each of us deals with each other.

This is the first book I have read by Gladwell and I will definitely be seeking out more. His conversational writing style makes reading a joy, and even though he is obviously a deep and brilliant thinker he brings the reader along with him, making you believe in your own genius.