Our website and all eResources will not be accessible from 27 November to 2 December while we migrate to a brand new website. Return chutes will also be closed at branches during this time.

Covid-19 update: Eight YPRL branches have now reopened, while the Hatch at Ivanhoe, the Hurstbridge Hub, and the Mobile Library continue to provide Click & Collect services. However the new Ivanhoe Library is yet to open. 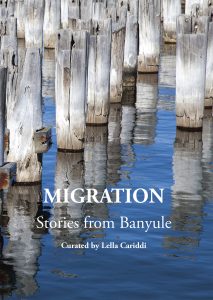 MIGRATION-Stories from Banyule reveals fourteen personal journeys of migration by and about people originally from the Aeolian islands, England, the Greek islands, Italy, Malta, Slovenia and Poland who came to Australia by ship, disembarked at Port Melbourne, and now call Australia Home.

This publication can be viewed as a vessel for transporting previously untold, unwritten and unheard family journeys. And while a great deal remains to be told, each story is significant, not simply because some of the Memory Keepers started life as young immigrants who experienced long, perilous and circuitous sea journeys before reaching Australia; or whose mother tongue belonged to ‘a language other than English’; whose parents would have been regarded ‘working class’; and who in a single generation, broke barriers of adversity and flourished as highly respected members of the community, as artists, politicians, business operators, volunteers and thinkers. But essentially because each family narrative found between the pages of Migration- Stories from Banyule introduces us to each other, reveals the story behind the story of who we are, where we came from, and why we call Australia home.