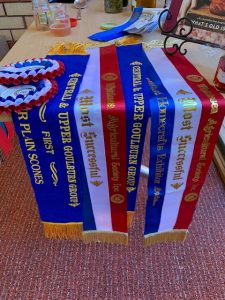 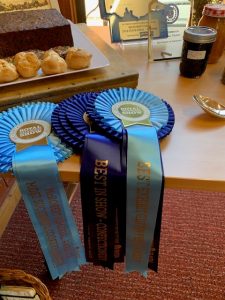 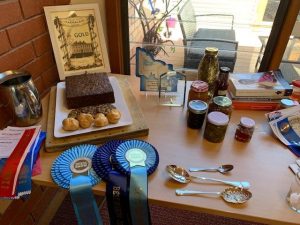 Local history month kicked off this week at Whittlesea Library with prize winning cook Anne-Marie discussing her 43 years as an entrant and judge for the Whittlesea Agricultural Show and the Melbourne Agricultural Show.  Anne-Maree was very engaging with her natural storytelling about her experiences.

Anne-Marie’s mother was a keen gardener so decided to enter her irises and roses in the Whittlesea Show. After winning a prize for her champion rose Anne-Marie's parents suggested that she enter her nut loaf in the Show. This was the beginning of a long association with the Whittlesea Agricultural Society. Anne-Marie was amazed to see a blue ribbon fro her nut loaf on her first attempt. She had never considered herself an accomplished cook and 43 years later she continues to enter her nut-loaf as a nod to this tradition. Her father was a savoury cook and her mother was good at the classics like raspberry coconut slice. When her parents were first married they worked in a country eatery. Her grandmother was also a cook and Ann-Marie continues to use her bread board in remembrance of her.

Anne-Marie also entered craft items early on including a hooked rug when they were all the rage as well as hand knitting.

Being self-taught Anne-Marie encourages people to “give it a go”. She does lots of experimenting and learned by her mistakes along the way. She has attempted lots of different categories. One year she decided to make bread for the first time. “How hard can it be?” Very hard! Her loaf was as heavy as a brick and after she emptied it out of the tin on the lawn, she feared that the birds would break their beaks trying to peck at it. But it is all been part of the journey. Rather than “Best in Show” which is how we promoted Anne-Marie’s talk she thinks that “From Little things big things grow” best describes her journey.

One year she could not find her nut-loaf following the judging and looked for a steward to find out why. An embarrassed steward after a light-bulb moment said that it had been eaten by the judges as they thought it was morning tea!

She was soon encouraged to enter the Melbourne Show, the pinnacle of Agricultural shows in Victoria where the country comes to the city.  From there she was encouraged to step up as a judge. This involved undertaking several courses, one with the Country Women’s Association (CWA) which she had to join as a member and with the Victorian Agricultural Societies Association. A judge’s job is to be impartial and fair.

Anne-Marie strongly believes in helping others, providing advice and recipes to other entrants. She has felt very connected to this special community. Volunteers, stewards, judges who turn these events around in such a short time frame. It is all “hand in glove”.

Anne-Marie is a multiple winner of the coveted McRobert Memorial Award at the Royal Melbourne Show for her cookery.  The prize for this award is a beautiful silver spoon.

Another competition Anne-Marie has entered is The Marmalashes   This is a marmalade making competition between England and Australian contestants (in the vein of the cricket Ashes competition). Winners (11 team members) are selected from a competition held at Buninyong. Australia has been very successful.

Anne-Marie’s Tips for entering the Cookery category at the Show
Competition cooking starts with you and your family and what you like
Get your show schedule early and follow the instructions, including recipes if given
Plan head by starting fruit cakes in May.
Other classes like Lemon Butter need to be made as closer to Show time as possible
Stagger yourself, depending on how many classes you plan to enter, the two weeks leading up to Show time can be very busy.
Be Organised. Anne-Marie admits to not being so and will discover she has a missing ingredient when she is well into the process (lucky a supermarket is open long hours 5 minutes from home!)
Some people freeze items before Showtime. Anne-Marie does not encourage this. Items can lose texture and flavour from this process.
To make a flat fruit cake, tap the tin on the bench and gently push the mixture into the tin with a damp hand.
Look for actual red cherries for a fruit cake. (Speciality shops sell them). They can be sold as quite a dark colour these days. Red cherries are like finding a sixpence in a fruit cake.
Scones need light hands don’t knead like bread.
Clean jars and bottles thoroughly including lids. A fibre from a tea towel can show in a jelly.
Consider the pectin test for jams and jellies that need to set
An aim is to make the judge’s experience memorable. For example, don’t let cloves overpower an apple pie but use the cloves to enhance the apple flavour.
Give attention to appearance and presentation. Taste your goods.
Preserves should not have air-bubbles.
Chutneys should not be too chunky.
Jams should not be too runny.
Have someone with you to help you transport and deliver your entries if entering many items

The Whittlesea Agricultural Show is just around the corner. The Cookery pavilion is always popular with a wide array of entries. Check out these resources to get you inspired