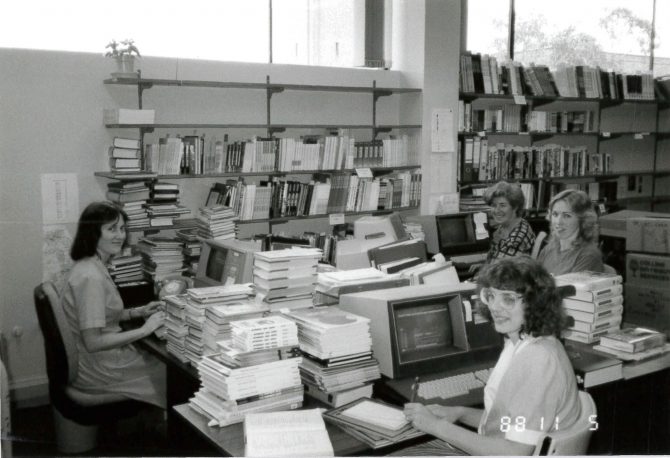 The team at Library Support Services are no strangers to packing crates, de-cluttering and moving on. “Headquarters” first operated from the top of Ivanhoe Library which was given over to the administration side of the library service in 1965 when Heidelberg Regional Library was established.

The book chute was in heavy use as collection acquisition and processing was completely in-house with a team in the Technical Services Department processing new books, music cassettes, magazines, posters and more and sending out to branches.

In 1993 Headquarters relocated to Rosanna, a relatively new building located beside Rosanna library in Turnham Avenue which I believe was owned by the City of Heidelberg soon to become the City of Banyule in 1994. Our home here was spacious, light and airy complete with a large tea room and still remembered fondly.

In 1999 we re-located to the glass palace in the middle of a cow paddock – the City of Whittlesea Civic Centre’s East Wing. In 2006 our space there was reduced by roughly half, at the same time change was introduced with the loss of the Technical Services department but formation of the Outreach team (to become Community Engagement which has morphed to Public Participation).

In September 2016, we moved out of the East wing and re-located across the way to PRACC north. In August 2019 we re-located again to a newly fitted out office space in the Danaher Corporate Centre at 6/1 Danaher Drive, South Morang. YPRL is now an amazing 54 years old with our history at LGA levels longer than that, long supported by the team at Library Support Services.

Read more about our history.